While language can prove to be a barrier between people, one thing transcends all cultures. Dance. So when life-loving Matt Bray decided to take on a huge project and prove that dance can indeed bring everyone together, he took an inventive approach to accomplish this. 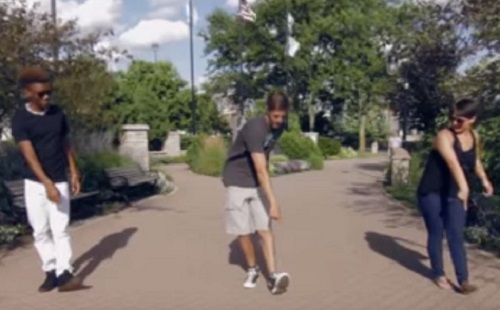 Matt loaded up his car and embarked on a 10,000-mile road trip. He created a YouTube channel called ProjectOneLife and in two months’ time, met 100 people who learned a dance routine Matt choreographed to the song “Gone” by JR JR. Matt traveled from city to city and places in-between that included rural settings, music festivals and other spots. That meant the backdrops behind these people’s dance routines varied, which only added to the final product.

After all of the dancers were videotaped performing the routine, Matt then spliced everyone’s moves together into one big compilation. Some of the dancers’ moves will blow you away and the grins on their faces are priceless. It’s amazing to see that in a world where sadness and ill will abounds, complete strangers were willing to dance with Matt and be recorded doing it for all the world to see.

Take a peek at this awesome dance collaboration for yourself by pressing “play” on the video below!