In order to exercise your brain, you don’t necessarily have to multiply 10-digit numbers in your head. Sometimes, all it takes is one picture with a hidden explanation behind it.
We recommend trying to solve these unusual brainteasers right now. All the answers are at the end of the article.
Hot Summer Day 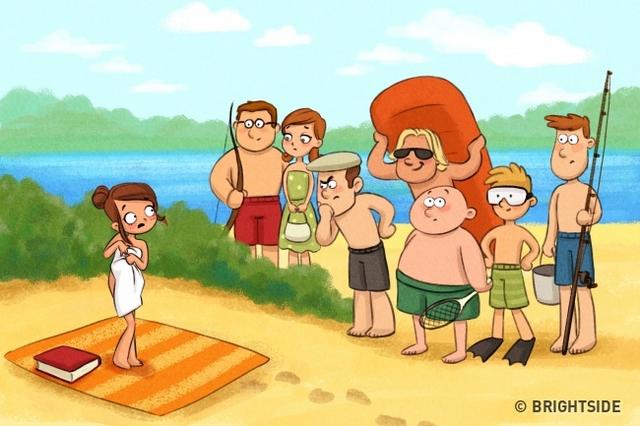 It was a hot summer day, and a police detective decided to catch a little sun by the banks of a river. Suddenly, he heard a woman crying.
“What’s happened?“ he asked the sobbing girl. ”Please calm down, and tell me everything one step at a time.“
“That’s easy for you to say,” said the girl between sobs. ”You can’t even imagine how dear that bracelet was to me. I come here every day. Today I took off my bracelet while sunbathing, placed it on top of my book, and accidentally fell asleep. I woke up, and my bracelet wasn’t there anymore.”
The inspector fell into deep thought. There were no footsteps left by other people in the sand around where the girl had been sitting, apart from her own. There were no other people in the vicinity. It followed that only one of the regular visitors to the beach could have taken the bracelet. These people had now formed a thick wall all around the inspector. He looked at them, and within a moment understood who could have taken it.
So have you worked out who stole the bracelet?
On the River 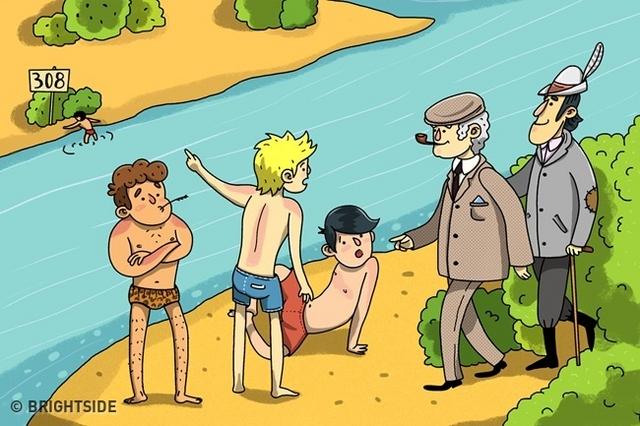 It was a hot summer day, but Inspector Varnike was on duty. The detective, along with his assistant, was chasing a criminal. Following in his footsteps, they found themselves on the shore of a small but very deep and rapid river.
The inspector and his assistant saw swimmers, approached them, and asked, “We are looking for a guy your age. He must be somewhere nearby. Have you seen him?“
”He ran past us a few minutes ago. He flung himself into the river right here. You can see him on the other side of the river! Hurry!“
The nice guy even offered to give Varnike his boat, but he refused.
“Let them run away,” said the inspector. ”Now I want to get acquainted with you.”
Why did the inspector decide to pay attention to the boys and not chase the fugitive on the other side? 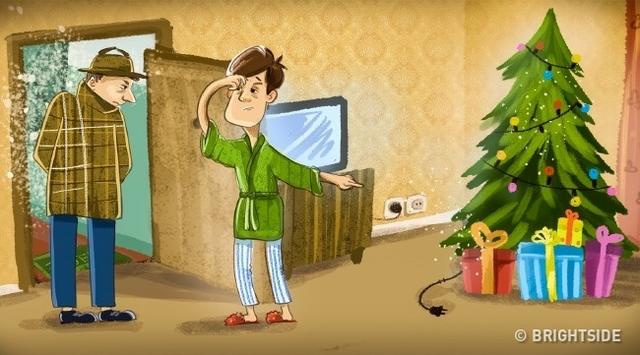 Inspector Varnike was on duty during the Christmas holidays. On the morning of December 25th, he went on a call. He rang the doorbell, and a minute later a sleepy apartment owner opened it. The inspector introduced himself and said, “I have to carefully inspect your apartment. Your neighbor says that yesterday, Christmas Eve, he came to your place for a party. And while he was singing songs along with your family next to your Christmas tree, shining with multicolored lights, you broke into his apartment and stole a number of valuable items.“
The owner replied, ”That’s not true! Our family celebrated Christmas Eve at our friends’ place. We went to them in the afternoon. I barely had time to decorate the Christmas tree before we left. We returned back home way past midnight and went to sleep right away. If you want, I can wake my wife and son up, and they’ll confirm all I’ve said.“
“There’s no need for that,” interrupted Inspector Varnike. ”It’s quite obvious to me that your neighbor is a liar.”
How did Inspector Varnike manage to catch the neighbor in a lie so quickly?
Answers
1. Who stole the bracelet?
The only person who could reach the bracelet without leaving any footsteps in the sand is the one with the fishing rod. He was the first person to fall under suspicion.
2. Who is the criminal?
The river was deep and rough. If someone decided to cross it, they would immediately drown. There’s no way the criminal could end up on the other side. So the criminal is the one who stands on the shore.
3. Why did the detective call the neighbor a liar?
The Christmas tree garland is missing one bulb, and it wouldn’t be working without it. The owner really did decorate the Christmas tree in a hurry, and he didn’t check whether the lights were working or not. The neighbor couldn’t have known this, and he lied about singing songs next to a shining multicolored tree. By the way, a garland’s frayed cord doesn’t prevent it from shining.