When nine-year-old Noah glanced across a restaurant one morning, he spied a Lakeland, Florida, police officer sitting alone eating his breakfast. He instantly became nervous and wasn’t sure how to act.
He knew what he wanted to do and told his mother about the plan. His actions that morning in the restaurant prompted the officer to jump out of his chair. The police officer was overwhelmed with what the little boy did…
You see, Noah wants to become a police officer someday. So Noah asked his mom, Amanda Cantin, if he could say “Hi” to Officer Eddie Benitez. Mom and son were together eating breakfast at a local Denny’s because it was “Bring Your Child To Work Day.” She of course said yes.
However, Noah froze. He didn’t know what to say. So instead, he did something that floored the officer. Noah had been saving up his birthday money and he decided he would pay for Officer Benitez’s breakfast.
Noah and Amanda flagged down a waitress and told them about Noah’s plan. Once they received the receipt, Noah wanted to write a special note to the officer. With Amanda’s help, he penned a heartfelt message.
“I want to be you when I grow up. Thank you for your service.” 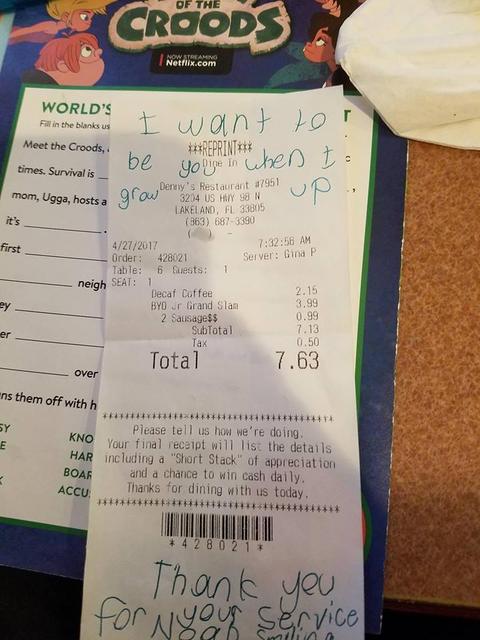 Then, Noah shyly walked over to the officer and handed him the note. Officer Benitez was stunned. He jumped up from his seat and insisted on taking a photo with his biggest little fan, Amanda said.

“He didn’t understand why this little boy was walking down there with his tab. His face was very shocked.”
Officer Benitez couldn’t believe what he read on the receipt. He was so touched by Noah’s act of kindness and the special message on his receipt that he carries it around with him every day.
“It meant everything. It meant that I’m supposed to wake up every morning and put on this uniform and go out there and do what I do. You know? It means that I need to keep trying to be a good example to all these young guys.” 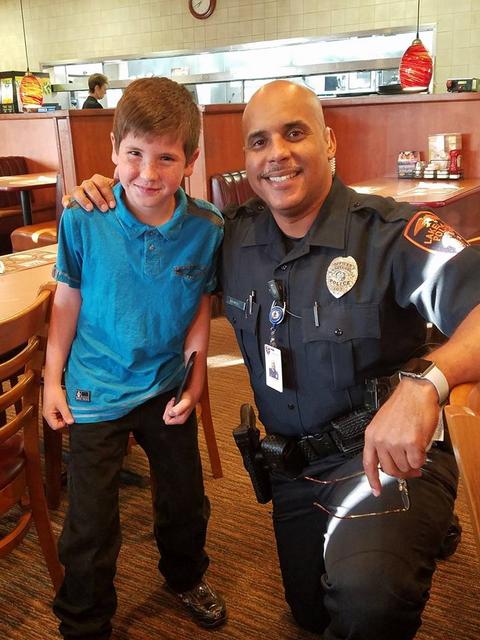 The Lakeland Police Department was so impressed with Noah’s heartfelt generosity that they shared the photo on their Facebook page. The department also thanked Noah for his kindhearted gesture.
“Well Noah, you touched all of our hearts today. Your support means so much to all of the men and women who put on the uniform every day.”
Noah was so excited by the attention from the police department. He has wanted to be a police officer for four years now and hasn’t let go of that dream yet.
“I’m going to make the world a better place and capture the bad guys.”
Amanda said if her son decides in 10 years to put on a police uniform and badge, she’ll be “one proud mom.” We think Officer Benitez would be pretty happy with Noah, too. Good luck chasing your dream Noah!