Marisol Villanueva was just your average teenager who posted an innocent mirror selfie of her outfit. But now, Marisol is enjoying her ten minutes of internet fame after her outfit post immediately went viral.

What’s so wild about Marisol’s track pants and colorblock sweater, you might wonder? Well, it’s the optical illusion her outfit unknowingly created.

Once you see it, there’s no turning back.

If you’re a teenager who’s an avid social media user, you’ve likely posted a photo — or series of photos — very similar to these ones.
Who wouldn’t want to show off their sweet outfit, after all?

Anyway, Marisol wanted to showcase that she combined vertical stripes with horizontal ones, and was still lookin’ fierce. 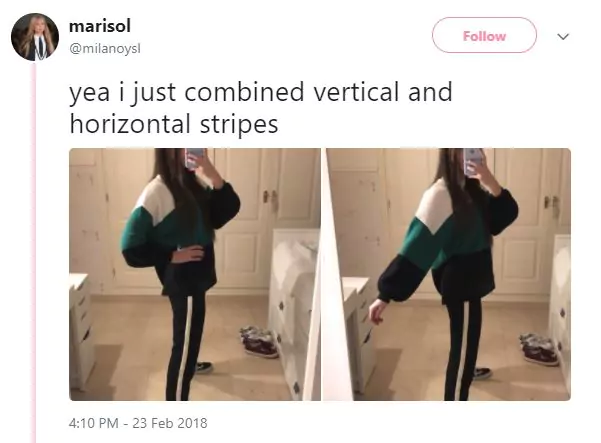 However, her followers (and soon after, the world) became immediately concerned with the size of Marisol’s “legs.”
You see, people thought that the white stripe on her track pant leg was actually a gap between both of her legs. Which indeed, would have been cause for alarm.