According to NASA’s biographical data, Gordon Cooper, who was an astronaut with NASA, was selected as a Mercury astronaut in 1959. On May 15-16, in 1963, Cooper piloted the Faith 7 spacecraft on a 22-orbit mission. Cooper also served as a command pilot of the 8-day 120 revolution Gemini mission which started on August 21, 1965. It was during that flight where he and fellow astronaut Charles Conrad established a new space endurance record. Cooper also became the first man to make two orbital flights. Cooper died in 2004 due to heart failure but revealed a space treasure secret that he had been keeping from NASA for many years, according to CBC News. 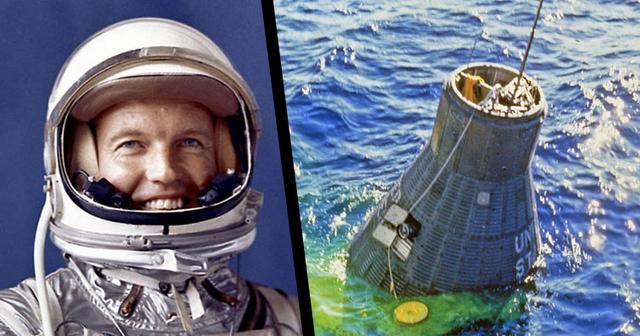 CBC News reports that Cooper was instructed to find potential nuclear threats by pinpointing magnetic anomalies while he was piloting the Faith 7 spacecraft for the Mercury-Atlas-9 expedition. Unfortunately, the anomalies that he was recording were much too small to be nuclear devices.

According to Darrel Miklos, who is a professional treasure hunter, he says that Cooper knew right away that they had to be shipwrecks because they were smaller and in the middle of nowhere–they were found in very isolated regions throughout the Atlantic, Caribbean and Gulf of Mexico, he told the As It Happens host Carol Off.

CBC News reports that Cooper recorded these coordinates in a notebook, and when he finally returned to earth; he started mapping them out on a sea chart. Miklos calls this “a treasure map from space.” These coordinates consumed most of Cooper’s life, CBC News reports. He compiled research about famous shipwrecks that matched coordinates on his map. Cooper’s findings led him to believe that the shipwrecks could be from the colonial period. During this period, ships would constantly travel to Europe from America, carrying treasures full of gold and silver.

According to Miklos, a lot of that treasure in that period never made it back. He also added that some of it could be from Christopher Columbus’ lost fleet. According to the National Geographic, in 1494, Christopher Columbus made his second journey to the Americas. He took more ships and more men because he wanted to create the first European colony in the New World. Unfortunately, in just a few short years, his settlement would perish. Almost one-fifth of his inhabitants were dead and at least six of his ships were sunk at the bay.

Cooper had plans to organize an expedition to find these buried treasures, but as I mentioned earlier, he passed away in 2004 due to heart failure before he could finish his work. But before he passed away, he did what any good adventurer would do; pass on his knowledge to another adventurer. Cooper gave Miklos the map and research with it.

Miklos says that he hopes that Cooper’s map and research can help bring light to the shipwrecks that have yet to be discovered. He wants to tell the stories of these shipwrecks and show the world and share it with host countries that allow him and his team to conduct research and survey their countries.