Cheating is the most horrible act one can take part it. 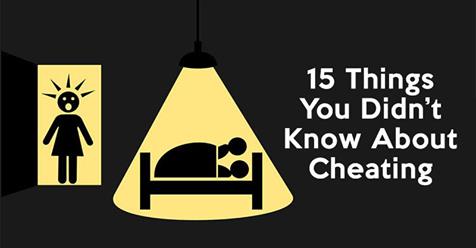 Cheating is something that is very hard to let go for some people. Just like when a person is diagnosed with a psychological disorder and even after he is fully treated, the stigma stays with him. In some cases, people learn the hard lesson but mostly it’s hard to trust the same person again after such a huge setback. Sometimes, people get confused when judging their partner and often end up with a wrong judgment that hurts later.

So here are a few things that might help you to know more about cheating:

1. People usually cheat with someone they know

Cheating seems pretty exciting at the beginning so people usually choose someone who they are familiar with and who can keep the secret as well as they can. You feel less guilty when you cheat with someone who is familiar because the comfort level is already developed and you don’t have to go through all the fatigue of dating before. It also makes them feel less guilty and getting out of it is easy too because “a friend is supposed to understand”.

2. Cheating can be defined in many ways

Cheating has many levels and for every person it has different criteria. Some people consider emotional cheating worse than physical and for some, a single kiss is unforgivable even. Sometimes, lying is worse than a one-night stand. You should know the limits to which your partner can bear your weird fetishes and if you care about them enough then you will stop before it gets too late.

3. People who fake it are more likely to be cheaters

Sex is the purest form of expressing love if it is done right. People who just fake the climax of their lovemaking are most likely to cheat on their partner. On the other hand, men tend to remain faithful to someone who orgasms regularly because it shows them how good they are and their ego does not get damaged.

4. Many couples stay together despite all the cheating

You must have seen many married couples who stay together even after knowing that their partner is cheating on them. This is mostly because married couples are so used to living together that the idea of separation on any cost scares them.

Sometimes, one person loves the other so much that they let them cheat right under their nose if it’s making them happy. To some, cheating is just a phase and after you are done with one experience you are back on track with your partner as if nothing ever happened.

5. When a man cannot get enough intimacy from his partner

Intimacy is a very significant part of a relationship. It can literally make or break a couple. I’m not saying that it’s all a man sees when he is dating a woman but everything else pretty much narrows down to it.

6. Cheaters are not always unhappy in their relationship

It is not necessary for a guy or a girl to be unhappy in their relationship. Cheating starts when curiosity arises and one thing leads to another making it impossible to focus on what you already have. The person stops cheating and realizes his mistake when the curiosity is gone but it does not always happen that easily.

Cheaters do not realize that in any condition, they are hurting feelings of people that they once loved and it is not right to slaughter someone’s trust in love for some kind of temporary fun that you want to have. I think it is the worst kind of cheating in which you hold on to two people at the same time and ultimately all three of you get hurt.

But everyone cannot move on and get stable as easily as the person who cheats.

7. Women cheat to end a relationship

It is harder for women than men to come up and break up with their partner so when they are unhappy in a relationship they tend to look for the easiest way out which is cheating. They tend to get attracted towards someone who might annoy you the most.

Confrontation is never easy even on the receiving end and women are hardly ever able to come up with all the courage and express their true feelings. As it happens during the relationship, they expect the man to somehow understand all that is going on in their mind because expressing it explicitly is not their thing.

8. Getting back on your partner does not work

Revenge never works. You end up getting more hurt than inflicting pain on your partner. if you think that your partner is cheating on you and you decide to get back on him by sleeping with someone else or getting emotionally involved then it kind of destroys your personality and lose your position as the faithful partner in that relationship.

Do not even pretend to be in a revenge relationship because it is childish and immature. It never works anyway because sometimes you just think that your partner is sleeping around and in the process of getting back to him, you lose the real thing you have.

9. Emotional cheating can be more dangerous

Emotional cheating is more dangerous because it either means that you are not emotionally enough for them or they do not feel comfortable enough around you to share their stuff.

So they get inclined towards someone who gives them both and while you think you have the best relationship in the world because the intimacy is great, you might be missing on the real deal. The cheater also gets confused between the two of you because he does not know if he should feel guilty or lucky to manage two things at once.

10. Social media can lead to cheating

If you are one of those people who share very less on the social media but get influenced by other’s stories which are full of pretty pictures and white lies. There is a high risk that you will cheat on your partner because apparently someone else is living the life that you should and your partner is responsible for that.

So make sure that you do not fall for what appears on your screen and leave what’s actually real in your life because that is plain crazy. Human feelings are very volatile and it is very easy to make someone fall for something that they desire but might never get it.

11. Cheaters want to get caught

Cheaters are happier when they get caught because it stops the endless lies and hiding. No idea why they just don’t stop cheating if they are so annoyed by it but that’s the way it works for some people.

They do not have the guts to tell their partner that they are cheating because they like the other person more so they just wait to get caught. It also saves them from so many explanations because girls usually just walk out when they come across a cheating partner which is kind of convenient for the guy because no one likes to explain stuff they don’t want to.

12. Women cheat when they are high on hormones

Coming from a fellow woman, women cheat when they are ovulating because at that time their body is getting prepared for pregnancy and if they don’t get the required physical attention from their partner, they go for someone who is ready to grab the opportunity. Sometimes they don’t actually physically cheat on their partner with someone but the thought might cross more than once and they might imagine it with someone they had a crush on.

This does not mean that they want to conceive, it is just a natural phenomenon because at this time the “happy” hormones are highly active and anything that stains that desire gets subsided for the time being.

Of course it does because the more the merrier. When you are with so many different people, you adopt multiple behaviors and that starts appearing after a while. Plus the sex makes you friskier as well. All your senses are active at all times because who knows you might get a chance to be someone on the first meeting.

So your charm actually helps you get laid more and girls dig for guys who are funny. They often forget that if they are that good with them right when they have met with them, they must be really good at this whole dating game which means they have multiple partners.

14. Your partner is unhygienic

Believe it or not, hygiene does play a very important role when you are dating someone. If your partner is unhygienic, you tend to stay away from them no matter how good their personality is. This leads to cheating because you cannot let go of a good person but the stink makes it hard to be near them.

Sometimes, it is more than personal hygiene which means that if you keep your apartment really dirty for anyone else to actually see then this might cause some big problems. Remember that girl Ross dated in Friends whose apartment was full of trash?

No matter how hot she was, he couldn’t go through seeing her for more than a few days because he couldn’t bear all that trash and goo in her apartment. It is a good thing anyway to be hygienic because you might like your filth but trust me, others don’t.

15. Love is not the same for everyone

Love is a relative term spread over a broad range of definitions. There are basically three levels of love that you can experience throughout your life. The first might be purely physical and comprises of physical attraction towards someone.

You feel inclined towards someone because the sex drive is too strong, but as you get to know them better, the lust is replaced by romance and it gets all better. The third level is that of attachment towards your partner. someone who has all three figured out with the same person will never cheat but sometimes you can have all the romance with one person and yet feel sexually attracted to someone else.